God of War shows that older franchises can be reinvigorated without falling victim to nostalgia. It’s a game that shows its growth as a franchise mirrored with that of its protagonist that falls short in a few gameplay categories which result in an enjoyable but hampered experience.

From its opening moments, one of the things this game absolutely nails is the dynamic between Kratos and Atraeus. Hell, the characterizations of Kratos in particular as the flawed and disgraced victim hero is outstanding. Before, Kratos was kind of just a vector for these bad ass gameplay moments but his lack of true development (at least in the first game) never gave gravitas to the tragedy of his tale. In this game, with minimal dialogue from Kratos (which actually lends well to his development), he feels more fleshed out and I really felt empathetic towards him. He really comes off as someone who has done terrible things, was used, and wishes for nothing more than to escape his past and become a better person. It really seemed like he was regretful of his return to parricide later in the game. The development of the relationship between Kratos and Atraeus from estranged and distant to a true bond of love was touching and I really have to credit the writers overall.

The game is gorgeous and the areas are varied and vistas are often jaw dropping. I mean, look at this shit. 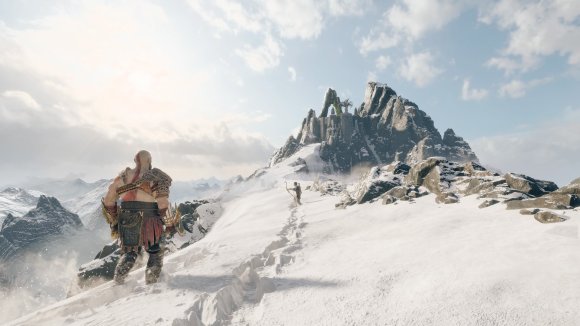 Santa Monica Studio has somehow squeezed every bit out of this console. I came into this game thinking the “one shot” camera might have been very gimmicky but it actually does make the game feel more intimate and the camera work in scenes where it disconnects from the player are usually well done. It actually ended up being something that elevated the title more than just being a superfluous checkmark. The level design is some of the best Metroidvania-esque direction I’ve seen in a 3D title. Going back to older areas with new abilities as well as the game drip feeding environmental change kept the relatively small but extremely dense world from ever being a tedious to explore. It’s very detailed and there are a plethora of items and things to interact with that result in mostly satisfying rewards. Rowing the boat around hearing Mimir and Kratos tell stories also meshed well with the “one shot” camera in feeling like the game never really had true “down time” I was never really bored or left without something interesting to do.

I also enjoyed the game’s use of Norse mythology. I’ve never been huge into this particular mythology but I found the way the game weaves it into the plot kept me very interested not only in what was happening, but what had occurred in this land. There’s something that’s just really neat about imagining a world where Odin and Zeus may have at one point popped some bottles together. The pacing is also executed well and the only time anything within the narrative felt off was when Atraeus suddenly has a character shift after having a revelation about his identity. I get that it makes sense for him to become arrogant with his newfound abilities and presence in the world, but holy hell not even minutes before this discovery he was kind of a lovable and insecure kid that is all of a sudden an insufferable prick. Thankfully this is rectified with a more nuanced return to character not too long after. Seeing the writers of the game create a narrative that involves Kratos’s maturation from male power fantasy to endearing father figure who is ashamed of who he used to be yet works towards improving himself might have been what Santa Monica Studio executed the best.

I started this game on the second to hardest difficulty because I wanted a decent challenge but didn’t want to go full masochist. The beginning of the game felt “difficult” for the wrong reasons. It wasn’t so much that I was dying often, it was more so that encounters seemed to take forever. Spongey enemies with huge health pools quickly gave way to the game being extremely easy. To the point where I stopped upgrading some things and decided not to improve a lot of the runic attacks and abilities because encounters became extremely routine.

Oh boy, and the encounters… Where God of War (2005) had unique enemies that all required different ways to beat them, this game has such a small palette of nasties that usually end up with me employing the same tactics. I.E. spam most powerful combo, dodge or parry a few times, hit a runic attack. Where the first two games had over the top and intimidating boss encounters that fit right into the theme of grandiose mythology and warring gods, this game is severely lacking in that department. How many trolls or ogres did I kill? Sure, the first time you encounter an ogre it was pretty cool. But by the 12th one you’ve killed, swapped with a different color or maybe an elemental resistance, they feel like the rest of the fodder enemies. The few times you scrape with Baldur were really the only moments that came close to the encounters in the earlier titles I’ve played. Towards the end of the game there are some weaker segments, one that is egregiously bad. The boat section in Her where it felt like I was quite literally fighting waves of the exact same enemy for almost 45 minutes.

There’s a lot of RPG elements in the game that feel tacked on and unnecessary. Why am I spending so much time in menus toying with stats that seem to have no real affect on gameplay, especially with how much of a joke the difficulty has become? Does the +4 increase to strength REALLY feel any different? No. I wish the game would have opted for meaningful upgrades to your armor or static sets that were placed at certain points. This would have probably made the progression of the gameplay feel a lot more like the first time you receive you Chaos blades, which felt like a genuine upgrade for Kratos. Instead, there’s so many armor sets that I just ended up wearing the ones that look the coolest. There’s also so many fucking runic abilities too. Less is more in a game like this.

But there’s good things about the combat too. It feels very weighty and every action has an “oomph” that feels great, especially the Leviathan Axe. Holy hell did I love this weapon. The audio-visual response that incorporates controller vibration, visual cues, and gnarly audio bits culminate in one of the most satisfying weapons I’ve had in a game. This is Destiny levels of “game feel” here. There were so many times where I just stopped and threw my axe around just to feel it coming back.

God of War is a strong addition to Sony’s first party lineup and the best game they published last year. There is a lot of room for improvement and I’d like see what can be done with this 3D Metroidvania formula and the new direction Santa Monica Studio has taken.

I’m Hagen McMenemy, a lover of the video game media that is setting out to be one of the voices providing in-depth analyses and critiques of video games that eschews the hype and inflation from major media outlets.

To me, video games are a form of art and should be approached as such. It is with a burning passion that I praise and deride them.

I’m a native of Alabama currently living in Atlanta with my two friends and cat, Dusty (whom I love dearly).

When not playing or writing about video games, I work a the Audience Manager for Avant-Youth, an Atlanta news outlet.